The Life of Leonardo Da Vinci

Leonardo Da Vinci was born April 15th 1452 in Vinci Italy out of wedlock. He was raised by his father, Ser Piero and his stepmothers. 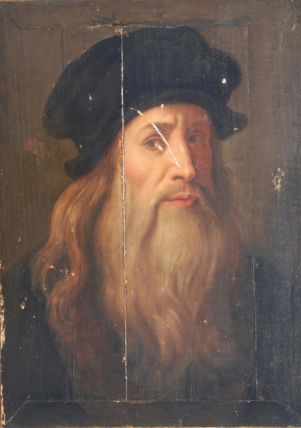 The picture above is a self portrait that Leonardo painted of himself
Video of Leonardo Da Vinci's Life
At the age of 14 Leonardo apprenticed under the artist  Verrocchio and within six years of that apprenticeship he had become a master artist and was working for very wealthy clients. Leonardo has over 25 well known master pieces; the most famous being The Last Supper and The Mona Lisa.
Mona Lisa Video

A Man with many Talents

Not only was Leonardo an amazing artist but he was a real Renaissance man. He enjoyed music, politics, math, and science.  He had came up with theories for aerodynamics and physics. He had also came up with many inventions including designs of the first parachute, eight barreled machine gun,  and inventions for men to fly. He had over 1300 drawings of inventions. And he also studied anatomy in depth.By the age of twenty he had his own workshop, to paint in, make inventions, and solve mathematical problems.  Some of his inventions were later made and used as war weapons.

-At night Leonardo would sneak into graves and dig up corpses to study the human anatomy.
-Leonardo was well know for not finishing things.
-He was a vegetarian for humanitarian reasons.
-He wrote many of his notes using mirror writing because he was worried somebody would try and steal his ideas.